Renting isn’t just for the young. More of the older generation are turning away from home ownership in favour of retirement rentals. The appeal may not be immediately obvious, but it works for people who want to keep a larger chunk of equity when they sell their homes and it allows the less well-off to see out their later years in relative luxury.

“When I joined McCarthy & Stone people said retirees would not rent,” declares John Tonkiss, the CEO of the nation’s biggest retirement housebuilder. Now rentals make up a quarter of its business, with some 1,500 homes to part-buy/part-rent through shared ownership going on sale next year.

The number of private senior-living rental properties in the UK will increase by 160 per cent in the next five years, from almost 5,000 to more than 13,000 by 2024, the estate agency Knight Frank predicts in its latest Senior Living Review.

“Now it is acceptable, and in some cases preferable, for the older generation to rent,” says Mark Dickinson, the CEO of Lifestory, which has rentals at all of its Pegasus and Renaissance high-end retirement homes. “Not owning a home will simplify things in the future. We are seeing families releasing equity to younger generations — so this market has changed. I see this becoming increasingly prevalent. At some stage we will see 100 per cent rental.” 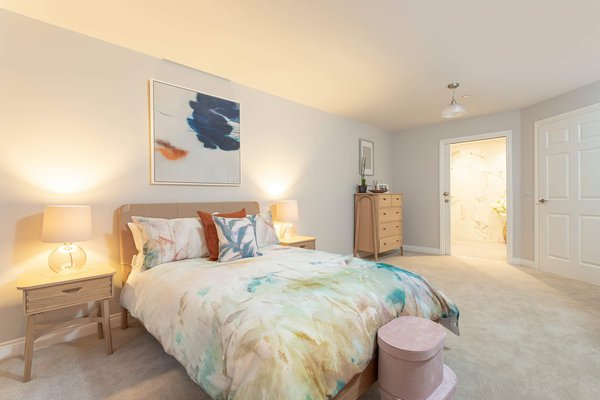 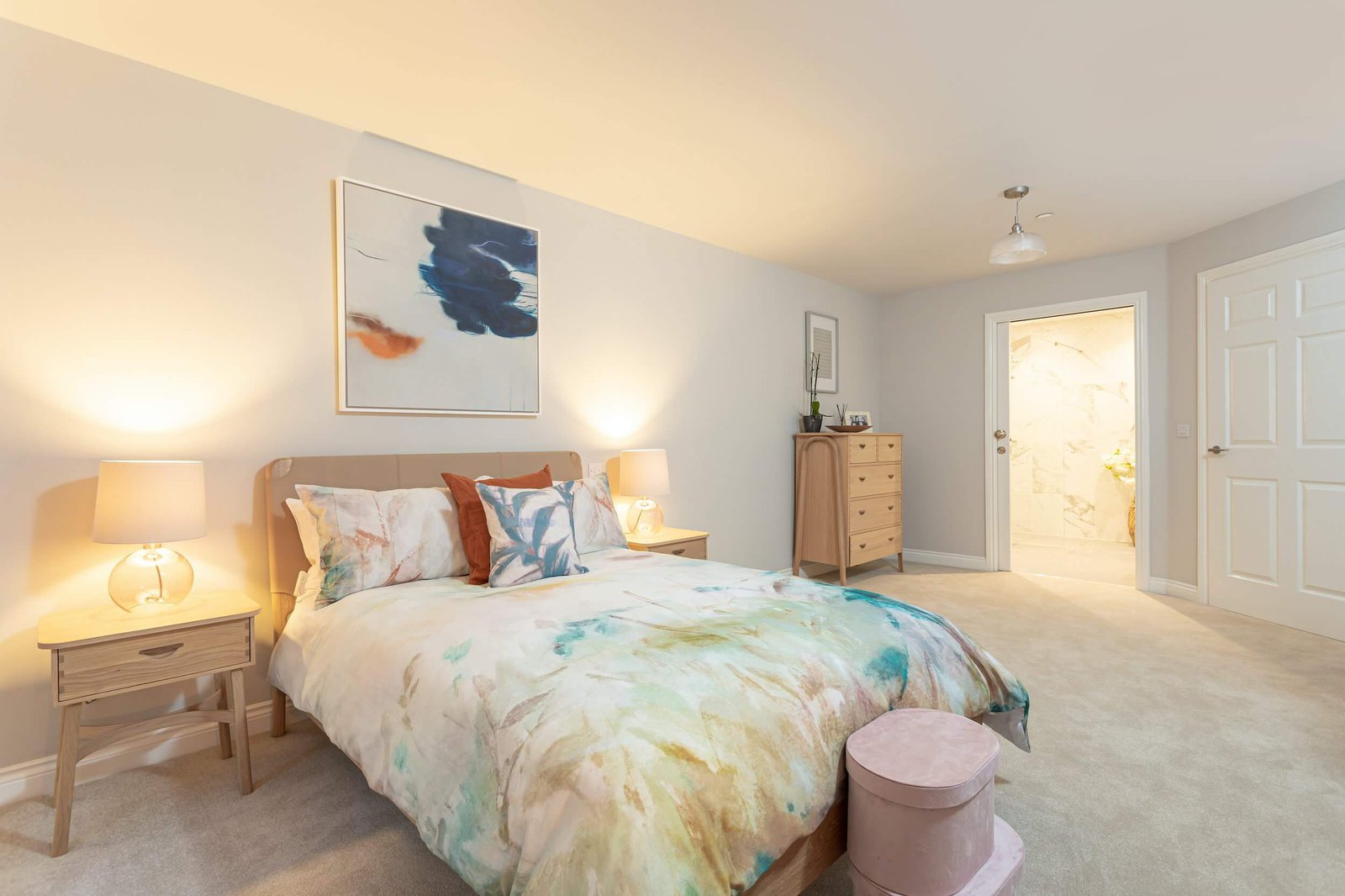 Renting doesn’t work for everyone, but for some retired people it offers the community and flexibility they are looking for. Returning expats often find it difficult to get back on to the ladder. For Mary Smith, who is in her early seventies, renting is the perfect way to transition back to life in the UK after spending 22 years in France. She returned last November after spending two lockdowns alone.

“My second husband died in 2019. I have family in the Poole area so came to look for somewhere to buy,” Smith says. “It is lovely to have somewhere to go and chat.”

She is planning to rent for a year under the “choice to buy” option at Lifestory’s Renaissance Sandbanks Road community in Poole, Dorset. If she chooses to buy a home, which start from £350,000, and complete on the purchase in the first year, she will be refunded the first six months of rental fees. Rent is from £1,957pcm inclusive of service charge, but not utility bills.

Others, like the former nurse and magistrate Jo Broad, 76, cannot afford to buy. She sold her bungalow in Devon for £300,000, but only got £90,000 because her late husband had taken equity release. Broad was diagnosed with lung cancer in 2018, and has recently found out she has bowel cancer too. Her one- bedroom flat with a balcony at the Queensgate apartments (birchgrove.life), in Sidcup, Kent, is closer to her three sisters and it is the country’s first rental-only assisted-living retirement housing scheme.

“It has taken all the worry off me as I can be cared for here if I get worse,” Broad says. She pays £9,490 quarterly in rent and all of her main outgoings are included. “It took 13 months to complete the sale of my bungalow, but I was able to move here and not pay rent until it was sold. There was lots included, such as a decluttering service and removals. I am living on the site of a hospital where I started my training as a nurse, Queen Mary’s Sidcup, when I was 16, so I feel I have come full circle.”

Peter Howitt, 86, a retired director, thinks renting his two-bedroom flat at Woodbank Apartments in Hook Heath, Surrey, is the best decision he made since selling his marital home for just under £1 million. He had intended to move in here with his wife, but she died before they could. Howitt says: “We decided to sell the house and rent somewhere so we could release capital to our children, Ruth and Jonathan. We were persuaded to rent when we found people had bought flats and then died before the development had been finished. So families were trying to sell their parents’ flat when people could buy new ones on the site next door.”

Rent is from £895 a week. Deciding to rent rather than buy has freed up cash for Howitt, who is looking forward to going on his first cruise, to Sicily, on his own. The spare bedroom has been turned into an office/artists’ studio, and the staff have displayed Howitt’s paintings and sculptures around the development. 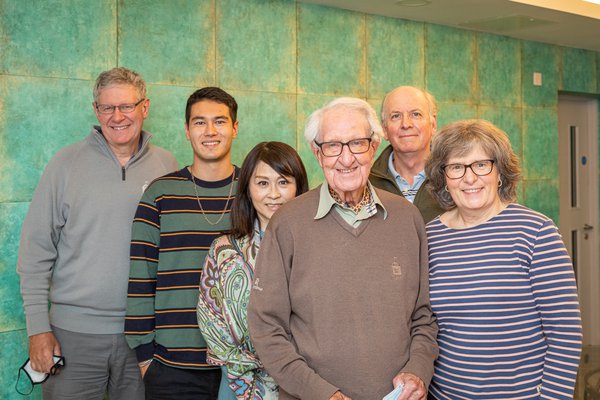 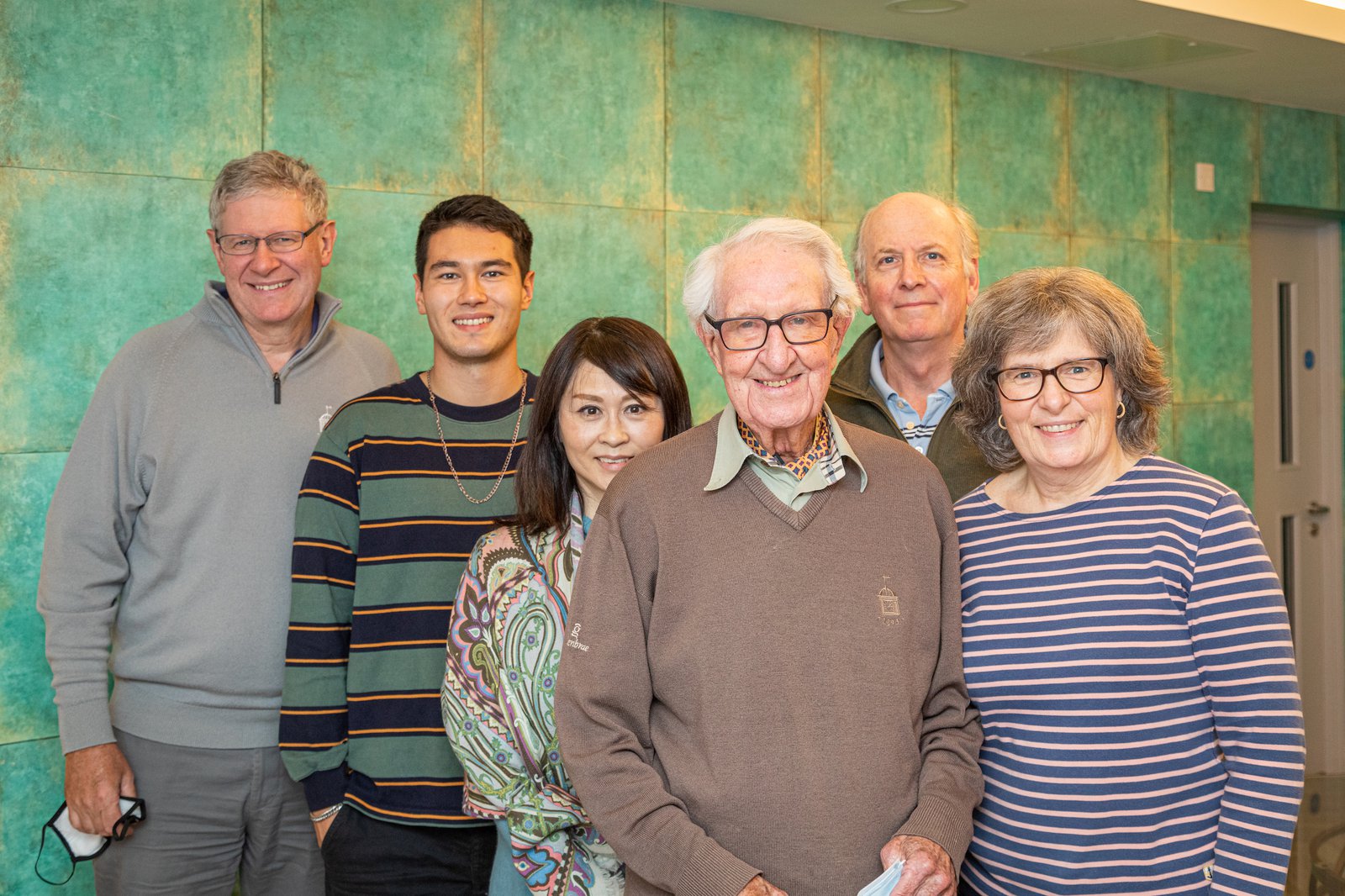 Those who are relatively fit and independent, such as the 90-year-old former dancer Jill Durne, choose to rent because it doesn’t make sense to buy at their age and they do not need care. She rents a one-bedroom flat with a garden at Beck House (mccarthyandstone.co.uk), a development in Isleworth, west London. She sold her home in Cambridge for £385,000 and moved to be closer to her son. The money from the sale has been invested for her, and it pays the rent, which is between £2,000 and £3,000 a month at the scheme.

“I’m trying to recruit fellow residents to my exercise class,” Durne says. “I’ve told my son this is the last place I am living. I will go from here in a box. I feel very blessed to be here.”

Retired tour guide Peter Anderson, 74, has kept his four-bedroom home and rents a room near by in Signature at Beckenham, a luxury care home in south London. “While I am excited about moving I am also anxious that it might not work,” he says. “Having my house near by is ideal. It also means I don’t have to get rid of all the furniture and can pop back and swap pieces.”

Renting is simply a stopgap for David Ellingford, 75, a retired accountant, and his wife, Susan, 73, whose bungalow burnt down in March, just 13 months after they moved in. It is being rebuilt, but meanwhile they are renting a three-bedroom flat for £2,660 a month next door to their favourite pub in Durrants Village, West Sussex.

“We lost everything but couldn’t find a place to rent that didn’t require a much longer commitment to a lease. Places were either too far away or very expensive,” Ellingford says. “We feel fortunate being able to live here. It is a lovely community of retired professionals. But we won’t be moving in permanently.”

Jane Slade is founder of the retirement property website Retiremove.co.uk 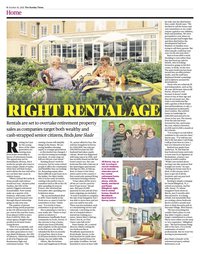 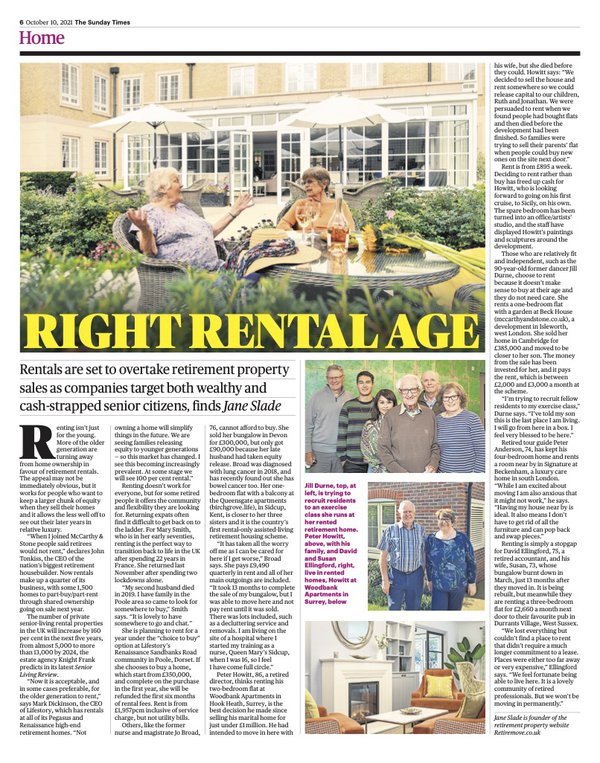